Our climate - our world

This is about our outer and inner atmosphere; which both have an effect

Conerning the first about climat:

Without its atmosphere, our days on earth would be like on the moon: a cold and hot black and white, without a blue sky, scattered light effect and filters against the hard radiation. So there are a few kilometers of breathable air above us. This mani CO2 causes the well-known, strong turbulence and extreme weather conditions between the warm "glass house roof" and the abruptly colder air above it.

However, also the heavy CO2, which had only reached an expansion of 3 meters before industrialization. In the meantime, however, it has already reached an average height of almost 40 meters. "So it remains absurd that we have to set 1 to 2 tons of metal in motion to drive an average of 80 kilograms of people through the area" - the VCÖ press spokesman posted on LinkedIn. So our traffic is also constantly increasing the toxic CO2 level! And just a few kilometers with the exhaust inside kills inevitably all occupants! It is increasingly similar to all life in the "passenger compartment" on earth - albeit due to several factors.

The high proportion of fine dust (in the nano range) that has recently emerged unfortunately overcomes both the cell walls and the brain barrier. Particulate matter is carcinogenic and it also damages our genetic makeup. It is therefore high time to make our entire economy and transport concretely and strongly fossil-reduced!

The consequential costs of the damage caused by climate catastrophes are several times higher than the investments known to be needed to phase out fossil energies! We (I) are also challenged to make conscious and sustainable decisions every day.

Regarding our inner atmosphere:

For more than 200 years, some technical developments, purely monetary and economic interests, soulless industries and questionable scientific applications have led us into dangerous mazes. Since then, humans have tended to be self-fixated sociologically, and as if caught up in contemporary trends.

In addition, we / I know very little about our global environment, about our / my history, and the successful but highly complex product developments. This makes us arrogant out of uncertainty and makes us forget our eternal soul nature. The where from and where to of things and of our own existence no longer seem conclusive and make us forget essentials.

It essentially comes down to our relationship with our Creator, through whom we may have life in the first place, and our respect for HIM, HIS order and HIS commandments. All cultures that disregarded God experienced their serious weak points after a few generations. Simply because in their families and their communities the good atmosphere, which was blessed by Him, diminished, and through their renunciation of Him, it grew cold/hot.

Today it is mainly work pressure, stress, belief in progress, false religious doctrines and ubiquitous propagation of values of an EGO-society, which lead away from the faith in God.

I am convinced that if we stand by God's laws, entrust ourselves to his grace, that our environment and our relationships with others will be healed again.

Especially religious people and the church also bear responsibility in terms of preserving creation; then the believer has to perceive technical use negatively and, in the sense of this responsibility, stand up for its change. Alternative concepts are offered on my website "TubeWay Solar", as PV films*, autonomous Device on the Fields, Vacuum walmodules, TOPten4Bikes and and and.

How can previously unbelievers connect with God? After all, we cannot see or touch HIM, nor imagine HIM in its entirety. But we could, for example, be amazed about his mighty creation. Maybe your idea of his presence in you and in the beautiful nature is a good start. Gratitude and amazement helped me personally to feel God's loving presence. Songs of praise helped me to learn to talk with the invisible but living God.

The search for "fulfillment in God" resulted in personal touch through his biblical word and the joyous fellowship with Christians and awakened in me the certainty of "a new heaven and a new earth".

Finally, the effect of our relationship to God is to be happy and feeling inner peace, independently of external circumstances. For example, married couples who pray together remain 98% loyal to each other.

And what is more desirable?

*Suppliers such as: AltaDevices, Flisom, Heliatek, Alwitra-Evalon-cSi, Hanergy, Nanosolar and Solaronix are currently showing a good price-performance ratio with their AgAs, OLED, DSSC, PSC or CIGS thin-film cells *. They can be cut to size, are light, self-adhesive, inexpensive to manufacture, can be recycled without any problems and are productive even in diffuse daylight. ThinFilm's and solar thermal will soon be part of the great solar energy revolution. 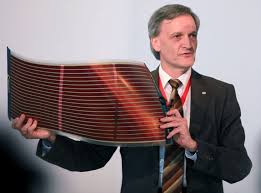 Hence something about the basics of all life ...

Who or what can protect us from the consequences of the already intensely dynamic, structurally structured threats?

Where water, air and fertile earth suffer such detrimental changes, life as a whole is threatened. There are also new moral problems; E.g. that stable interpersonal relationships and those with our Creator decrease.

The preservation of the family and respect for life lose strength and terrain, with serious consequences.

What is preventing the rapid achievement of the existing SDG contracts? Is it just the interests of those who are successful in rogue - who got rich with resource theft and patent blockades, wealth transfers and Bitcoin trading or with tons of weapons and drug deals? Does it really only come to our environmental problems because of powerful capital and economic pirates?

By those in the first place; but I think that would be too brief: Despite decades of expert warnings and despite the many environmentally conscious people, no real change of course has yet been achieved; too many are only geared towards consumption.

It is necessary, for example, that work-related modernizations are socially compensated. Otherwise protests and civil war-like conditions remain to be feared - a hungry men is an angry men - women too.

The last two centuries in particular have shown a frighteningly rapid thinning compared to the previously wondrous diversity of life. But the error of our dangerous competitive thinking can still be transformed into ethically fruitful achievements of real solidarity.

I am also concerned about our common interventions in the natural processes of conception and birth. This kind of "freedom and feasibility" can lead to not inconsiderable psychological damage as a consequence. It also seems morally difficult to me; after all, they often destroy the unborn's own life or at least the harmony of the family partnership (especially in the practice of surrogacy PAS).

It would also be necessary to take supportive measures to protect mother and life! Single parents should, for example, receive full-time wages for six hours of work per day (or three in the half-day range) to balance their services and obligations towards their children.

Visions for an extended future

To do this, I have to do away with the old prejudice that our "enlightenment" and the earlier religious values are  incompatible. People rightly seek to be embedded in the largest possible frame of reference. However, knowledge and  reason alone cannot provide the security in which God wants us to be included.

Genesis, for example, has conclusive explanations about the beginnings of our existence. Well, the Bible conveys  pictorial  periods of creation to an old understanding; it still offers us considered, conclusive answers.

Because what made the big bang pop, space & time and the elements? To our mortality and our origins, all the clever,  successful, exact science gives zero meaningful and calm answers.

Without will, information, perfect wisdom, highest love, (God's) omnipotence or absolute truth, this planned life  development can never have started the long way into the splendid appearance!

Therefore, nothing becomes nothing - life comes from the living God! We shouldn't want to disconnect from that!  Therefore, we are - faster than ever - similar to an embryo before its approaching birth:

It too is getting too tight and there is a threat of undersupply. The little person can also not imagine the world outside, and  so he is afraid of existence. It is actually about to be or not to be - life or death!

The placenta has been used up, the environment is becoming increasingly toxic, and there is great distress - the narrow  birth canal.

Mother and child (and ultimately also the father) come to the limit of their potential.

Globally, among other things, the lack of biodiversity leads us to precarious drops in nutrition. Here, too, the good air, the  clean, sufficient water and the general quality of life are diminished. Actually, this limited world - despite our efforts - can  only be hopelessly lost.

The Russian Nobel Prize for Literature Alexander Solzhenitsyn once said: "People have forgotten God, and that is the  reason for the problems of the present. We will not find solutions without man´s return to the creator of all things."

And the renowned founder of hagiotherapy, Tomislav Ivancic, asks - Does the child in the womb know that it has a  mother? He offers the following comparisons:

"Human life is like the course of a river. At the moment of conception, a person arises as if from an invisible source,  grows up for nine months, before flowing into the world through a bottleneck like a river between rock walls. But then it  grows again, as if it continued to flow on this earth from year to year, finally flowing through the gorge of death into the  ocean of eternity.

In other words, man goes through different worlds as he enters the finale of life. First he lives in the world of his mother's  body. There it grows from a small, tiny embryo to a fully grown infant of nine months. Then he leaves the world of the  womb, dies for that world and is born into the world of the "earthly body".

If he gets too old for the world of the womb, he can no longer live there and has to go out as if he had to die. But at that  moment he begins to live among us, tiny and small, without consciousness of his own.

Then he grows and begins to run, finishes school, grows up to be a young person, an adult person, and later an old man or  an old woman, and finally, having matured again, out of the body of this world into another , eternal, to be born into the  world of God.

Life does not end with being old, but one becomes ripe for another life. Just as a child did not end its life after nine  months  in the womb, but became mature to be born in another world. It is interesting that the child lives in the womb but  the mother does not see it. She cannot touch her, knows nothing about them and has to ask what is actually outside the  shell of the womb.

Similarly, the person who lives here on earth feels like in a strange body. He does not see who sent him to earth, whose  sympathetic and gentle hands hold and carry him, what is outside of earthly life, where the end of the universe is, whether  the universe has an end at all and where God is. Just as a child is in the mother, moves, there is without knowing where  the  mother is.