Traps for swarms of locusts

Inspired by the great plague 2020:

Simple, large, net-covered frames would be cheap to create. 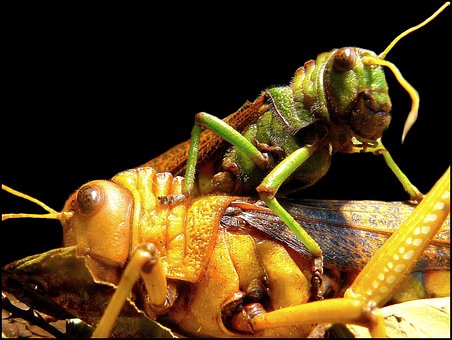 Large, net-covered frames can be produced cheaply and easily as follows:

The body is made of long bamboo poles. In "peacetime" these are stacked under tarpaulins.

By inserting the thinner bar end into a thick bar start, units of any length are created.

Alignable to the direction of flight of the arriving swarm, the respective side front is left on the ground and thus forms the open entry into the cage.

Several tons of the protein-rich grasshoppers can be caught in it and, depending on the circumstances, used for agricultural purposes.

Gradually, charred in easy-to-do pyrolysis stoves, the scent scares away other locusts from the area and results in a good soil improvement as a Animal charcoal fertilizer. Large parts of the yield could serve as food for the pets or possibly also for the humans.

Attractants - which would have to be developed - could let the swarms fly into such traps.

Ducks like to eat live grasshoppers as well as harmful rice snails in large quantities from the field.

The goal must be a harmoniously tolerable population. It is not intended to overstate the “harmful side of grasshopper species”, nor to endanger the need for safe crop yields of local people.

At best, these approaches should also flow to the UNHCR. FAO and UNIDO for further implementation.

To prevent grasshopper populations from growing, insecticides such as organophosphates (e.g. malathion), carbamates (e.g. bendiocarb) and synthetic pyrethroids (e.g. deltamethrin) are used so that the number of larvae is reduced. There is also intensive research into biological grasshopper control agents (such as pheromones). The advantages are obvious: pheromones allow the locusts to be combated in a species-specific manner, do not damage the natural enemies of the locusts and at most lead to low environmental pollution.

Similar effects can be achieved with the ingredients of Niembaumöl. The main active ingredients are azadirachtin, salannin, meliantriol, nimbin and nimbidin. Azadirachtin is the main component of the never oil and is obtained from the pressed seeds of the never tree. The substance inhibits larval development, while melian triol directly protects the useful plants and discourages locusts. In contrast, the no-active substances are relatively harmless to humans, mammals and many other insects.

If the animals have already formed a swarm, commercial insecticides are used. This is most effective at dawn when the animals are still inactive. At this point, a large amount of insecticide can then be spread over the area by plane, ideally to kill the entire swarm.

In China, ducks were successfully used against a locust plague around the turn of the millennium.

See too my site: wirundunserklima.jimdo

Lentils: The recipe against world hunger

Small plant - big hope: Lentils could be the key in the fight against hunger and malnutrition. They thrive in dry regions, are very rich in protein and are true powerhouses full of minerals and trace elements. Scientists all over the world are working on making them even more productive and disease-resistant thanks to state-of-the-art biotechnology.

Lentils could be what mankind urgently needs: a real nutritional miracle. The undemanding legume not only thrives particularly well in dry regions; lentil plants also have the ability to store nitrogen from the air in their root tubers. In this way, their cultivation also fertilizes the soil in a natural way. Lentils are also true powerhouses full of minerals and trace elements.

If the small pulses are eaten together with cereals or wholemeal rice, the result is a perfectly balanced meal from a nutritional point of view. This is because lentils contain around 25 percent protein. Scientists all over the world are therefore making efforts to make lentil plants even more productive. Researchers are breeding particularly robust varieties and also extremely fast-maturing ones that also fit into the crop rotation of small farmers in poor countries.

The new varieties are also bred to contain even more important nutrients such as iron and zinc. Thus, lentils are also a recipe against hidden hunger and malnutrition. The largest grower of lentils is now no longer India, but Canada. The province of Saskatchewan is already called the "lentil chamber of the world". Canadian lentil plants were developed to be harvested with machines and at the same time are resistant to weed killers. This guarantees huge yields.

(In Canada the lentils are often part of the 4-year crop rotation. This saves nitrogen fertilizer)

At the same time, however, an ever-widening supply gap is developing, particularly in countries where people are particularly dependent on lenses. The work of lens researchers is therefore a race against the consequences of climate change and population growth.

# You and every Company can these approaches  expand to an product line of its trademark. No patents - no strict conditions.

Reduced flows of money and goods are happening globally - shrinking to the regionally possible. Previous megastructures are giving way to the change in values of the ~ 8 billion majority, the turbulent climate and the general shortage of other opportunities. A lot of it is completely absurd - also because self-thinking and competition thinking will make way for a general >WE<.

# I ask all those who want NO more to be informed of activities of TubeWay solar to send an email with the subject "unsubscribe".

See too my site: